Public high school in the Netherlands (1994-2000). There are no private schools in Holland! (and no uniforms either)

I studied biomedical sciences at the University of Leiden in the Netherlands from 2000-2005.

I am a junior postdoctoral researcher

Me and my work

I’m working on some drug that can prevent you from getting fat, and can make someone who is already fat loose weight!

Well, by accident we found that this iron chelator drug stops mice on a high fat diet (think McDonalds every day) getting fat! Iron chelator drugs are normally used in people who have too much iron in their body, something that happens after blood transfusions for example. Too much iron in your blood is really bad for you (toxic) and your body can’t naturally get rid of it, hence you need the pills!

We originally started to use these iron chelator drugs to increase the levels of a protein in mice with diabetes. The protein we were working on is good for your pancreas, an organ that controls your blood sugar levels. These drugs could increase this protein and prevent diabetes in mice.

Then, we decided to put the mice on a high fat diet for about 6 months. Mice fed a high fed diet for a long time will become slightly diabetic, just like people. And that’s when we found that these mice that get the iron chelator drug don’t get fat!!!

All mice that got the high fat diet looked like greasy little balls of fur with some legs sticking out after six months.  However, the mice that got the exact same diet with with the iron chelator mixed in, stayed nice and thin!

So…..we were very excited (think: obesity crisis solved, no more dieting or exercising to stay thin, Nobel prize, getting loads of awards and money….), but had no idea how this drug was keeping mice thin. And in science, it’s always about the mechanisms!

Of course, the first thing we though of: “Did the drug make mice eat less food?” The answer was no.

So did the drug make mice be more active? The answer was no.

So did the drug increase burning of energy in these mice? The answer to this was yes!

We first checked their body temperatures over several months with a small thermometer in their rectum (mice don’t seem to mind at all strangely enough). We found that the mice on the drug were slightly warmer (about 0.7C warmer)!

We then put the mice in a special cage overnight which measures how much oxygen they use and how much carbon dioxide they produce. As we hoped to find, the mice receiving the drug used more oxygen and exhaled more carbon dioxide! This is an indicator for more body metabolism (burning of energy).

We then had a closer look at the organs of the mice, to find out where the energy was burned.

Well, to make a long and complicated story short, we found that the iron chelator drug works by activating a tiny area in the brain called the hypothalamus. 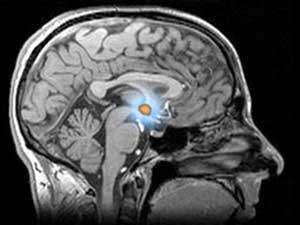 We know that the hypothalamus regulates food intake and metabolism. Often in people who are overweight, there is a problem with this part of the brain. We found that the activated hypothalamus sends signals to the body fat stores in the belly and tells them to burn fat!

Although we still don’t know what these signals are between the brain and body fat, this is great news for those who want to keep eating fatty foods and stay thin. But does is work once you’re already fat??

We tested this over the past few weeks, by giving mice a high fat diet again to make them gain weight. Then, we switched the diets to a high fat diet with the iron chelator drug mixed in and hooray…. the mice started to loose excess weight wihtin a week of switching the diet!

With a bit of luck (=loads of paper work and enough funding), we hope to test out this drug in people by the end of the year. The good thing is, this drug is already approved for human use and is safe to use. But it is currently used for a completely different disease, so we need to find out if what we find in our mice, also works in people!

This video was made by a former PhD student from our lab, who looked at vitamin D and the function of beta-cells. Beta-cells are the cells in the pancreas that produce insulin, something your body needs to take up sugar from the food you eat. No insulin = no energy for your cells = high sugar in your blood = diabetes!

It was for some sort of science competition and she won!! All people dancing are working or have worked in our lab.

Some lab experiments, weighing my mice, some data crunching in excel files, some distraction by Facebook and websurfing, and finally reading some science papers that are relevant to my work. 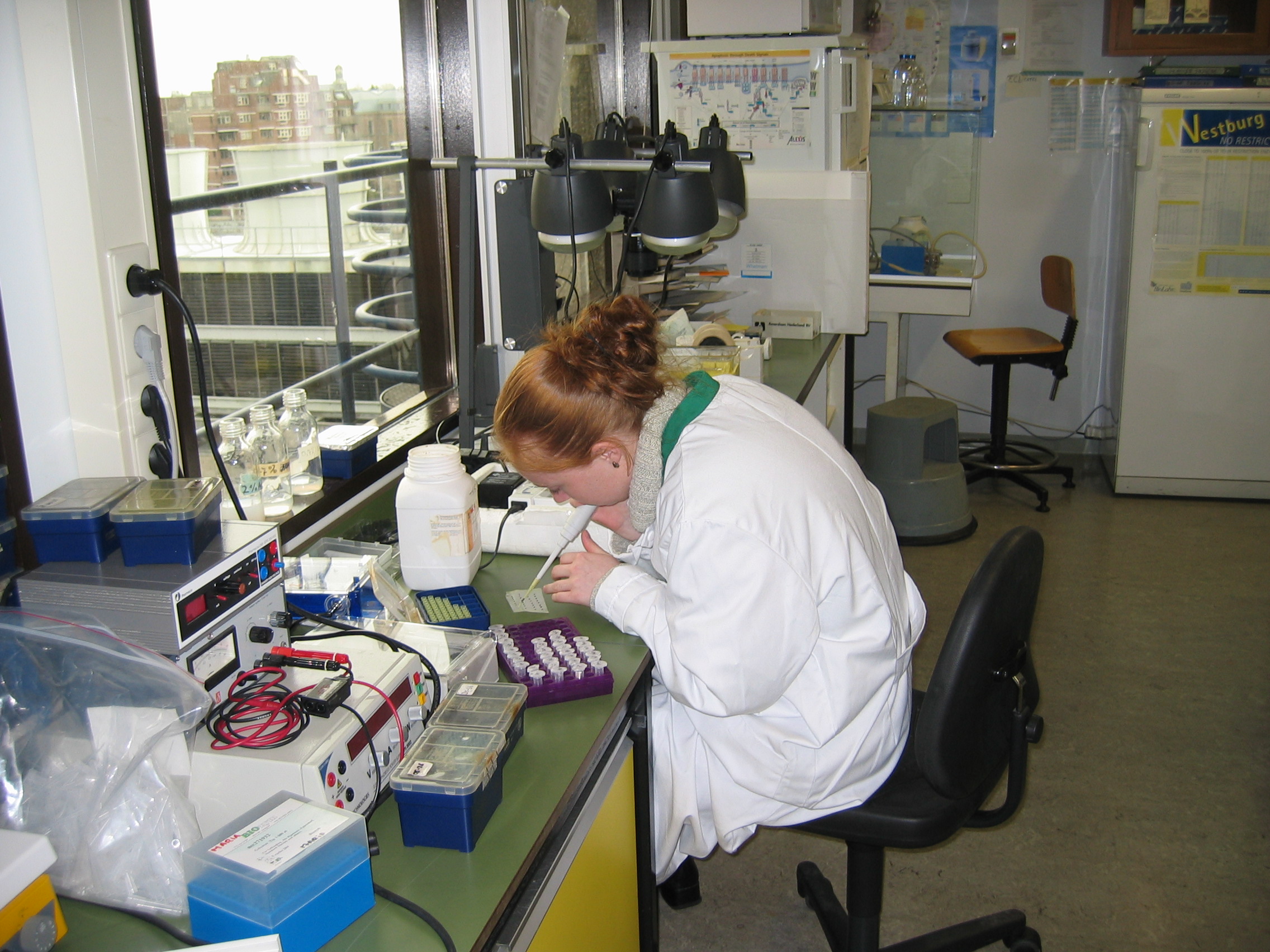 These experiments could be to look at hormone levels in blood samples from my mice, or to cut thin slices of tissues I collected, or to make buffers I need for experiments using a range of chemicals or even to weigh my mice and give them their special diets!

On top of that, twice a week someone within the Garvan Institute or from some other institute will present his or her work in the auditorium we have here. This is a great way to find out what other people are working on so if you’re stuck with your research, you know who to ask for help!

Every 2 weeks, we have a lab meeting, where we discuss some lab issues (problems with mice or experiments gone wrong). But it is also a great way to have a social chat with your lab members and relax a little.

The Garvan Institute and many other non-for profit research institutes are full of young people. You might think of scientists as boring old people with grey hair and body odour, but most researchers I work with are aged between 23 and 34 and look just as “cool” as people in other jobs. 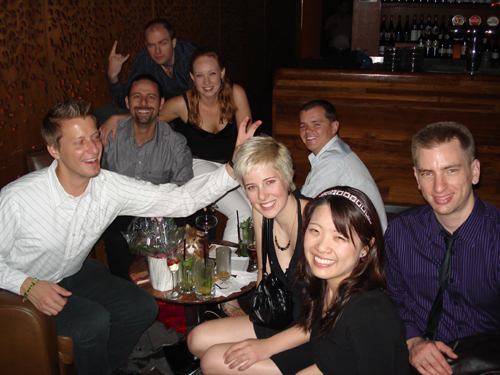 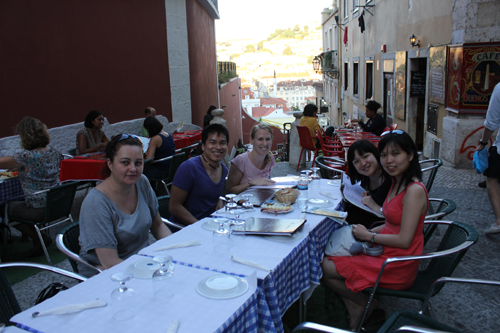 The few older people we have around are the lab heads and they spent most of their time behind the computer.

We have heaps of students (honours, Masters, PhDs) and loads of people from overseas. I myself am originally Dutch. My workplace is a very social place. Every friday we have free drinks and nibbles in the cafeteria for people to catch up and relax. We now also have a ping pong table up there where people attempt to play ping pong after a few too many beers.

Medical research of course has a very serious side to it, but I find that it’s mostly young and funloving people with similar interests doing a job they love! 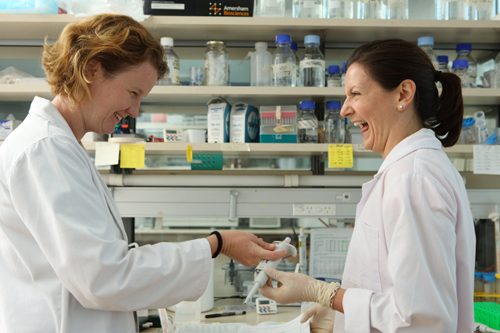 What I'd do with the money

I’d use the money to visit interested high schools and teach kids about junk food and their devastating effects on the body.

Believe it or not, but 60% of the Australian population is overweight or obese (=very very overweight). This includes a lot of children. We’re actually the 6th fattest nation in the world. Shame on us!

As you know, the causes for this are 1) there is less need to move and be active and 2) we have a lot of food that is high in fat and sugar.

As a someone who is addicted to chocolate, I know how hard it is to not eat bad food all the time. But as a medical researcher specialising in obesity and diabetes, I know how these high fat and high sugar diets affect the body.

Being overweight massively increases your risk for diabetes, heart problems, certain types of cancer and death.

I would like to change their thinking and understanding of food and food labelling (fat, sugar and calories content). It is important for everyone to understand what these high fat and high sugar foods do to your body over the years.

And with a bit of luck, a better informed younger generation might reverse the obesity epidemic in the future!

How would you describe yourself in 3 words?

Who is your favourite singer or band?

I don’t have a favorite, but loving pop, R&B, salsa, techno and dance music!

What is the most fun thing you've done?

Backpacking and camping through Canada with a friend at the age of 18….it’s a miracle I wasn’t eaten by bears

If you had 3 wishes for yourself what would they be? - be honest!

1) Miranda Kerr’s body, 2) Beyonce’s voice and dancing skills and 3) a farm with loads of different animals

What did you want to be after you left school?

A researcher looking at human diseases, how they happen and how to prevent or fix them

Were you ever in trouble in at school?

My French teacher thought I had cheated on a small exam. I had forgotten to put away a list with words we had to memorize, even though I truely didn’t look at it during the exam! She didn’t believe me, I got a score of 1 out of 10. Ah well….

What's the best thing you've done as a scientist?

I published a bunch of science papers and have been able to present my work at overseas conferences! [myimage8][myimage9]

Tell us a joke.

I suck at jokes because I can’t remember any! Or I only remember half, so no one is laughing…sorry!

None really, most are boring to watch, but I don’t mind watching sprinting and downhill skiing events! Huge fan of Usain Bolt!